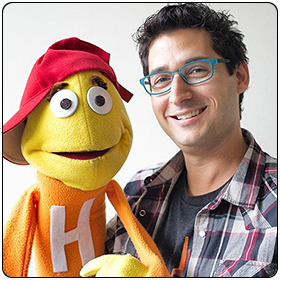 The inspiration for Rock-a-Baby came after years of working with children of all ages and recognizing a need for early childhood exposure to music. Trachtenberg made a career as a piano teacher by day and gigging keyboardist by night. With a B.S. in Music Education from N.Y.U. and a strong desire to enrich children’s lives through music, he expanded his career as Music Director for several plays and music programs at schools and community centers in Rhode Island and New York. He became accompanist for Looking Glass Theater, a touring group that brings theater to underprivileged schools and communities. He co-created a children’s musical theater class at the JCC in Manhattan, co-wrote children’s musicals The Lady & the Ladle, and Hood, a production of Robin Hood for the Wheeler School in Rhode Island. He has performed with Jay and the Americans, The Blues Brothers, with cover bands, The Tremors, The Free Downloads (who appear in the feature length film: The Comedian, 2017) and recording artists including PT Walkley. He currently tours the world with youtube sensation Postmodern Jukebox. Marc has also composed and performed for television and web (Gillette, Ad Council, Hasbro, Team Umizoomi), and even appeared as the voice of Keanu Reeves on MTV’s Celebrity Deathmatch. Trachtenberg’s diverse and extensive experience culminates with Rock-a-Baby – a unique and enriching musical adventure for you and your child.